Like I already wrote in my first story about my new ESP LTD SA-2 Richie Sambora was that I was not too thrilled about the sound coming from the neck pick-up on my new guitar. (read it here). The pick-up’s installed on the SA-2 are ESP LH-100’s. I have seen and heared better quality. The neck pickup is roughly 14K ohms and that the bridge pickup is 15K ohms.  They are two-wire pickups with a copper base.

So after doing some investigation regarding new pick, and being a fan of the DiMarzio sound, I again went back to my local music store, Timmer Muziek. I knew that he had some pick-ups in store. Dropping by to order some other stuff (will come to that later… 😀 ), I decided to see if there were any of my favorite pickups in store (DiMarzio).

I ended up buying the DiMarzio PAF classic (DP195). I initially aimed for the Gibson Burstbucker Pro, but these were a little bit more expensive and harder to find…and not DiMarzio. I decided to try the DiMarzio instead. I bought it at the same price as where I could buy it at Musik-Produktiv or Thomann so that was exellent.

Especially since I did not have to place a mail order or drive all the way to Germany…. and I like buying gear at local shops! 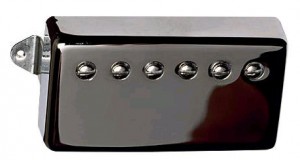 Now, hardest part was not to get the pick guard off.  I have done this approximately 4 times now, since I tried to insulate/shield the wires of the pick-ups. 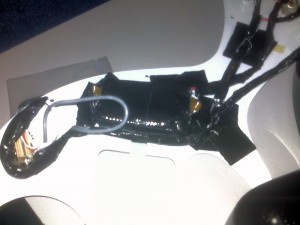 naturally, no luck with that. Anyway, I started open-heart surgeory. 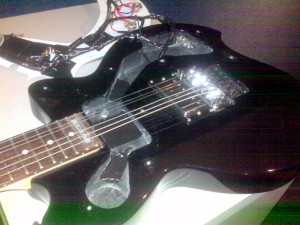 You can see the quality of this picture is not too good. This had to do with a) the quality of my camera/phone and b) the nice lighting in our studio, which is more for ambiance than for making good-quality pictures.
After getting the pick-guard off, I checked where the wires of the neck element were soldered. The read wire was soldered to “hot” and white to “ground”. I took a picture of it but it was too bad. The wirering can be traced back to the ESP owners-manual. 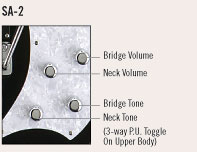 Anyway, I soldered this old pick-up out. Then I had to figure out how the hell I should connect the 4 wires of the DiMarzio to the 2 locations of the old LH-100. I read the installation manual for the DiMarzio PAF Classic and it turned out that the LH-100’s were placed into a “Standard humbucking parallel wiring” schema, that requires 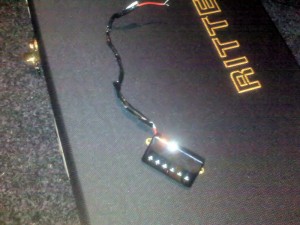 So, that was pretty easy. I took by 25 Watt soldering device and it took me approximately 15 minutes. Be sure not to blow cold air to your weld after soldering it. Just let it cool normally, do not try to be in a hurry. If you do blow and try to cool it, you might end up with a so called “cold weld”, wich can break easily.
Anyway. I tried the guiter after re-installing the pick guard again… The sound was amazing. It is everything that fits with this SA-2. it is THE Richie sound. Also, the feedback I got from the neck pick-up was gone! Amazing.
So, next month I will be replacing the bridge pick-up with a DiMarzio PAF classic. 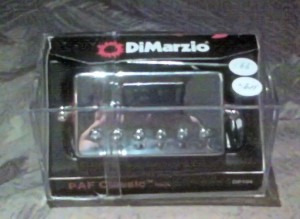