After checking the stock at Thomann and Musik Produktiv I also noticed that the guitar was not available anymore. Since I have always wanted to purchase a second model, due to the fact that the guitar plays really well, especially with the unfinished neck, I decided to go for it. 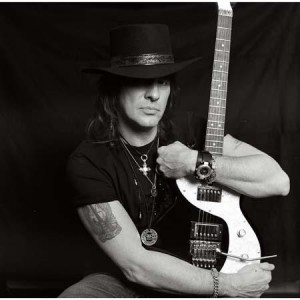 Now, I have put out an add on the larges dutch auction website called Marktplaats but after a week I did not find a used model. And used…. hmmm, perhaps a new one would be appreciated. So, I emailed by favorite music store in the area called Timmer Muziek in Beverwijk, The Netherlands, who has a very large stock of guitars, mostly new.

The owner of the store told me that he had one in stock and could sell it to me for a nice price. Since I am a regular customer there, that is a nice thing. I always like shopping there.

This morning, I have thus purchased my second SA-2. I will probably be replacing the pick-ups with Gibson Burstbucker pickups this time. The point is that the pickups on the SA-2 are not great quality. The bridge pickup by itself sounds o-k and could probably do, but the neck pickup, also in conbination with the bridge pickup (where the switch is in the center position) simply squeeks and gives a load of feedback, when my disortion is activated. I cannot seem to figure this out. I also encounterd this on the first SA-2, so I figure this was not a one time incident. The previous SA-2 I have equipped with DiMarzio PAF Pro, which gives a very nice and clear sound. However, this time I would like to get more output and would like to give it a thicker sound.

Chris Hoffschneider, the designer of the first prototype for Richie, used pickups designed by J.T. Riboloff. I need to get in touch with J.T. 🙂

Here is a picture of the 2 SA-2’s together at Lost Highway Studio. Sorry for the poor quality, but the camera on the Blackberry is not to well. 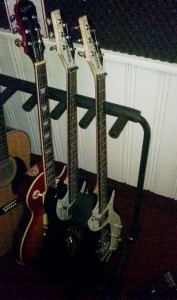