Since I am currently working on some studio recordings, I decided to share some stuff with you guys. As a reader of my blog you must sincerely appreciate things I have to share with regard to studio work.
Anyways. I am currently working on the new album of Deafening. After finishing the last album called Disillusion, which I have produced along with the guys, it was time for some fresh numbers to be recorded. 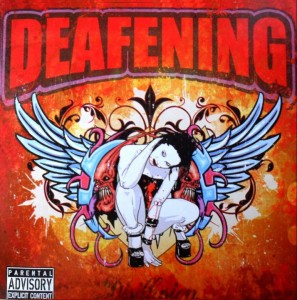 So, recently, Axel, Case, Flow, Wouter and myself started recording new material at Lost Highway Studio. After laying down the basis of the tracks, the second guitar parts were recorded, in order to give the sound more body. Being able to tweak Flow’s sound in such a way that in blends into the mix, the songs are getting better and better.

Along with Wouter, we have recorded a multitude of vocal tracks, and for some songs even, we were able to create a real choir. Now, the results are to be heard in a later stage.

Some ne tricks I have learned in Cubase were that by using the right tools, you can create a midi track from a vocal track, in otder to support virtual instruments. How is this done? Here’s a quick guide:

Now, all you need to do is connect a VST to this track. For use of a choir for example you could use a VST such as Magnus Choir, which is an easy to use tool. Although I wish the interface was somewhat larger.

How you have found this to be a useful post.