Since a couple of weeks I am the proud owner of a genuine Gibson Joe Perry Boneyard Les Paul. Intrigued by the guitar and its beauty, I decided to dive more into the backgrounds of this guitar, which is no longer produced by Gibson. It was produced from 2004 to 2006.. 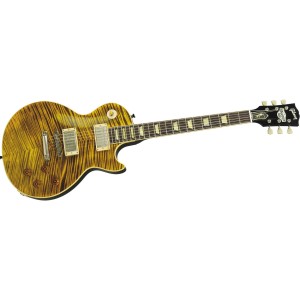 The guitar was built by Gibson’s custom shop. Only 502 guitars were built, including the 2 prototypes called Pilot Run models. These models have an inked number and hand written “Pilot Run”. I do not know how many prototypes were made, before this series of 502. 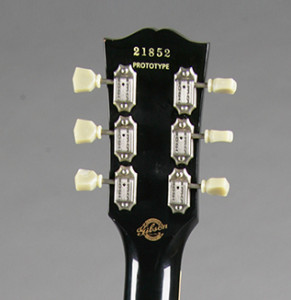 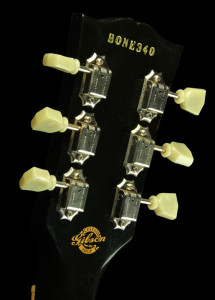 The guitar has a figured carved maple top, with a custom “Green Tiger”  or “Aged Tiger Green” finish in nitrocellulose lacquer. Custom shop has selected  great wood for this guitar. it has vintage cream binding, aged nickel hardware, and Kluson-style tulip-button tuners. The headstock has a mother-of-pearl “Boneyard” headstock inlay, as in the picture below, which is from my own guitar. 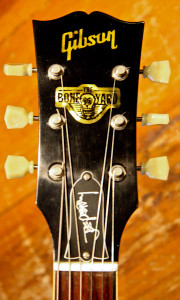 Boneyard headstock (my own guitar)

Notice the truss-rod cover which is engraved with Joe Perry’s signature. The BONE has the tune-o-matic (ABR-1) bridge and stopbar tailpiece. where also a Bigsby vibrato was optional. The guitar has been fitted with humbucking pickups—a BurstBucker 2 in the neck for warm, vocal tones, and a slightly hotter BurstBucker 3 in the bridge for muy midrange grind and singing lead tones. Notice something really cool, which is that the neck pickup has been wired reverse-polarity for funky out-of-phase tones in the middle position, per request of Joe Perry. Here’s a picture of my own BONE. 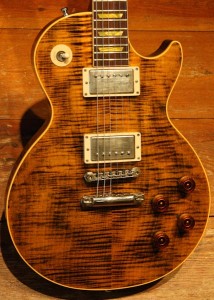 The guitar has a mahogany body and highly figured carved maple top being AAAA figured maple. The construction is a 1-piece mahogany with long neck tenon. It has a Rosewood fingerboard with aged acrylic, as shown on the picture below of my guitar. This s is similar to Les Paul Classic . The neck has 22 frets and has a rounded profile similar to 1958 Les Paul. The scale length/Nut width: 24-3/4″; 1-11/16″. 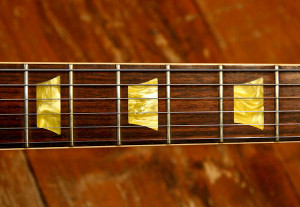 .Each guitar was shipped by Gibson each with a Custom Shop hardshell case and Certificate of Authenticity, making the package complete. 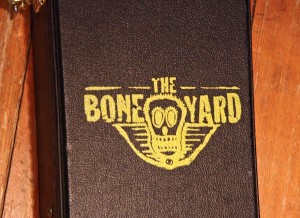 Note that there are a lot of fake BONES around. An expert will spot the difference (and can actually hear the difference), so if you every have questions about one of the BONE’s you would like to buy, feel free to contact me. 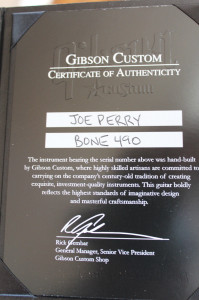 So, the complete package: the guitar, the details, the hardcase and the certificate make the value of this guitar. Naturally, if you also have the pre-shipment checklist with it, it’s even cooler. Here’s another picture of my guitar. 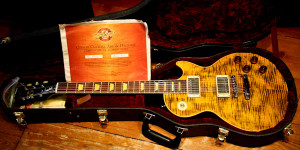 The Gibson employees who worked on the project were given a special T-Shirt: 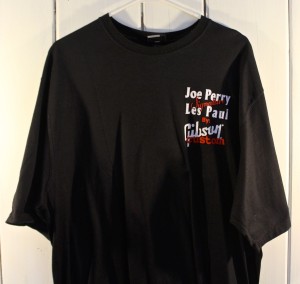 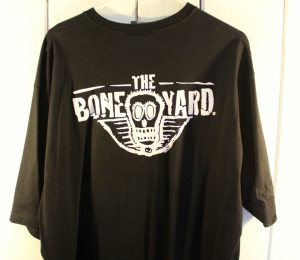