Many has been written and said about vintage guitar gear and pedals. As a guitarist who tries a lot of gear, I am still in the ever lasting quest to find the best tone for my guitar. During this quest for tone I have found one of the better pedals out there which is highly underrated: the Marshall Bluesbreaker 2. 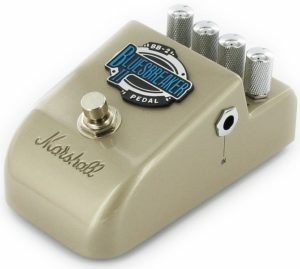 The Marshall pedals have been somewhat underrated during the last couple of years. During the early years of the Marshall pedals, this was exactly the same. When the Bluesbreaker I pedal came out, there wasn’t much interest. This only increased when this series of pedals (say, from around 1992) became “vintage”, somewhere between 2007 en 2017. So, I have concluded that the Bluesbreaker 2 is a different pedal than the original, but is a winner too. In 10 to 15 years people will again seek out for this quite affordable pedal.

Now, the marshall Bluesbreaker I is the vintage pedal that I am referring to. I have tried this pedal in 2015 and it’s a great pedal. However, for my “line of work” it wasn’t aggressive enough and the volume and tone were somewhat too low for me. The BB2 pedal is a bit more agressive.  The original Marshall Bluesbreaker is from the 1990’s and sadly is no longer in production. Prices on eBay are sky high and therefore the BB2 seemed to be a more affordable alternative.

At the date of writing this post, prices vary from 200 to 300 euro on various on line market places. My guess is that the pedal, when it first came out, was not highly expensive. At least, not as expensive as it is now. Given the fact that I still want one, I decided to try the budget option first, being the Blues Breaker 2 (BB-2). It was relatively inexpensive and my thoughts were that Marshall is not completely stupid: the BB-2 would have to be a better pedal than the BB-1. (I am still unsure, so once I buy one, I will post a comparison.). The BB-1 is the choice of various artists such as John Mayer.

But, this post is about the BB-2 pedal. Marshall says the following:

“The Bluesbreaker II takes the philosophy of our original Bluesbreaker pedal one step further by adding two modes, Blues and Boost, effectively making it two pedals in one. Boost mode is designed with the vintage valve amp or ‘tone purist’ player in mind, for when you don’t want to alter the tone of your amp at all, but want to drive the front end harder to push the amp further into natural overdrive.”

“The Boost mode features a clean boost controlled by the pedal’s volume control, which will not affect your original tone. It can also be used for boosting the signal which can sometimes be lost when using long leads (particularly with single coil pick-ups). Blues mode is reminiscent of the tonal and distortion characteristics of our non Master Volume amps, such as the classic Bluesbreaker combo from the 1960s. This mode produces a wonderful natural style overdrive for crunchy chord work and singing single notes for truly inspirational leads, all delivered with the warmth and tonality of those early Marshalls.”

This pedal basically has two functions:

The Boost functionality, switched with “Boost” mode, basically makes the sound of an amp thicker and bolder, which, especially with tube amps, creates a crunch without increasing the volume of the amp. Boost Mode is fine in addition to a lot of drive and amp is easily adjusted by turning the volume only.

The drive mode is controlled with the 3 knobs, drive, tone and volume. and seem to be somewhat progressive. Drive Mode provides a very round drive.

The upsides of this pedal:

The downsides of this pedal Here’s a great review of the BB-2 on YouTube.

Naturally, I would like to let you know something about the Bluesbreaker I pedal as well, so I have incorporated the following Youtube Movie.

Guess you can actually spot the difference. Although these are just youtube movies: it all depends on how it was amped. If you can find a move of the BB-1 vs. the BB-2, drop me a line, so I can post this movie as well.

Here is a link to the Manual for the BluesBreaker 2.

In case you would own a BB-1 pedal and you would be willing to sell it for a reasonable price, I would love to be the new and well-caring owner. State of the pedal will need to be great, I intend a long lasting relationship with the pedal.