Some time ago I decided to trade in my Mooer Ensemble King Chorus pedal for a Boss CE-2W Waza chorus pedal.
The reason for this was that I felt that during playing, the Mooer chorus generated some ‘tone suck’. The intensity of the tone went down when I kicked in the pedal. Just slightly, put it did. 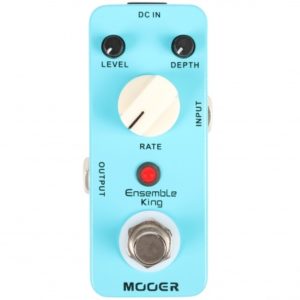 The sound of the mooer chorus was quick okay, and very subtile. I was however looking for something better.
Hence, the Boss CE-2W Waza chorus. This pedal is way more expensive. The Mooer goes for approximately EUR 60,- and the Boss does EUR 209,-. One would say that it will have to be a better pedal.

My first impression of the CE-2W was that the chorus sound is fare more distinctive and way more classic. The Mooer was somewhat subtile and in some cases not easy to distinct. The CE-2W is in your face and is absolutely a Chorus sound. 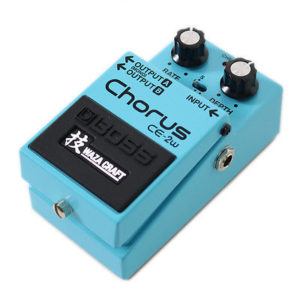 The Boss CE-2 Chorus and its big brother predecessor the CE-1 (along with the same effect built into the Roland Jazz Chorus amp) defined the sound of chorus during the late Seventies and Eighties. So basically, you have 3 pedals in one. The CE-1 chorus pedal option (which is switchable with the small mini three-way toggle switch for selecting the CE-2, CE-1 chorus or CE-1 vibrato modes), sounds best to my ears. It has the chorus sound with sufficient ‘bottom’, that many pedals lack.

The Rate and Depth control knobs  are identical to that of the original Boss CE-2 chorus. Compared to this original pedal an extra output is provided for stereo chorus-only (output A)/direct-only (output B) effects.

Only one issue: when I kick in the pedal, it sounds louder than my normal signal chain. I need to figure out how I can deal with this. I have a controllable FX-loop on my Silverback, so perhaps that can help me. This volume jump is especially noticeable in the  CE-1 mode. I have read a couple of forum posts here and there. People mention that this was the case on the old CE-2 back in the day. So I need to see if this trim pot (in the original CE-2) might do the trick?

“The trimpot is used to set the bias for the MN3007 delay circuit. Due to component tolerances, the manufacturer needs to have some way to adjust the exact resistance to get the delay circuit to work “just so”. So the trimpot will inevitably be set slightly differently in each pedal. It’s not a question of taste or build year (as in “the early ones had the trimpot set like this, and the later ones like this”) – it’s a function of the tolerances of the components in that specific pedal. This trimmer should only be adjusted with an oscilloscope, using the calibration procedure set out in the service notes.”.

So I guess not…

Well, apart from the volume issue, which I think I am able to correct either by playing softer or by using my FX loop knob, it’s an awesome pedal.