In search of the best tone for the Silverback I have moved over to Boss pedals recently. The Waza Craft series again have bumped up Boss to the higher regions of pedal quality. After moving away from Mooer pedals (which were quite okay and are great value for money), I wanted something classic and solid.

And thus, I needed to go and seek. I needed a Boost pedal for the FX-loop. At the time of writing this article (May 2017), Boss unfortunately did not produce a boost pedal anymore. I scavenged their website for a boost pedal, but was unable to find it. Sure enough there are people who have tried the Boss BD-1 Blues Driver as a boost pedal. Not really what I wanted. I needed a dedicated boost pedal. The Mooer pedal was quite okay, so I liked “boost”. Hence, I decided to go and find the discontinued pedal called the Boss FB-2 Feedbacker/Booster. 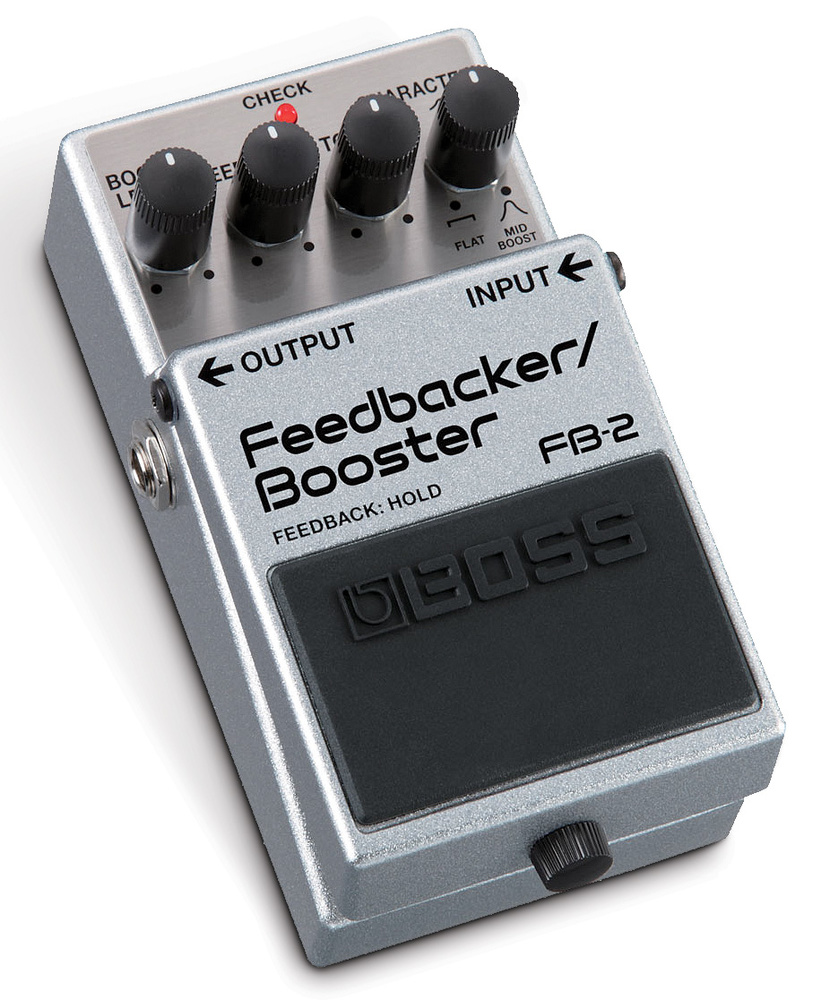 The first thing that struck me about this pedal was the color: silver-flaked. Does it matter? Nope. just a detail. The pedal is an unusual one, which incorporates some rather clever technology allowing guitar players to create  feedback-powered sustain and  at relatively low levels. (So, you can get the on-stage-haning-your-guitar-in-front-of-your-speaker-cab-sustain, without instantly annoying your neighbours. Now, this is a nice-to-have gimmick: the main purpose of this pedal is to serve as a gain booster. This feature has variable tone and character, so that valve amps can be pushed into natural overdrive without losing any of the original tone.

The pedal has 4 knobs for:

Using this pedal for the first time during a solo with my band, it struck me that I was unaware of the pedal being used, other than my volume being louder. I use the boost pedal in the FX-loop of the Silverback. And this was a good sign. I used the Marshall Bluesbreaker 2 as an Fx-Loop boost as well as the Mooer Pure Boost as a (clean) booster. The Mooer was okay and did the trick quite well. The BB2 pedal however is, as a boost in the FX-loop, a bit too glassy for me. It does the trick better in front of the amp. However, that was not why I wanted the boost pedal.

The tone control can be considered to be fairly neutral around its centre position and brightens the sound when going clockwise or rounding off the highs counter-clockwise.

FB-2 from the top

The character control is basically a mid-frequency boost that sounds very effective when pushing an amp into overdrive. There’s nothing too mysterious so far, then, although you can set up a boost level for solos, then back off the guitar volume control to get a clean sound that’s pretty much what you’d expect to hear with the guitar turned fully up and the pedal bypassed.

The pedal works as expected until you press and hold the pedal, at which point the feedback effect is faded in over a period of a second or two, and the guitar tonality changes because of the filtering and extra gain that’s been added. If the amp level is set too low, the sustained note eventually dies away and you’re just left with boosted pickup hum and amp noise, but it’s surprising how quietly you can play and still get the effect to work. When you release the pedal, the transition back to the clean boost tone is also smooth.

I find the FB-2 to be a great pedal, allowing me to play my solo’s at a higher volume level and using the right tonal character for my solos. And if this feels well, I play well. The sound of the pedal can be defined as being a “musical” sound. I have heard boost pedals that were noticeable and were somewhat harsh. The FB-2 is more musical in stead. Even though I spent very little time tweaking the pedal. Band rehearsal started and I guess the band has become rather exhausted when it comes to being patient about my gear-chaging-time. Anyway, the quality is great and the FB-2 is a low-noise gain booster with tonal adjustment alone. For more specifications, check out the FB-2’s owner’s manual here.

Here’s a review by ProGuitarShop.com

And here is a review by Sweetwater

Unfortunately the reviews do not cover the FB-2 in the FX-loop.  If you find a youtube video that discusses the FX-loop option, please drop me a note, so I can add this to this review.