A lot of rumours have been going over the internet about the Richie Sambora Signature Stratocaster “Black Paisley”. I hope to give you enough information about this guitar to clear your mind.

First of all, only 200 pieces of this guitar were made by fender Japan in 1996 for the 50th anniversary of Fender. This is also enscribed on the back. Fender can check your serial number. There are some chinese copies of the guitar, but that can really be noticed when playing, as well as by the overall quality of those guitars.

I own one since 2006, which I bough second hand from a man in Germany. He had received it as a present from his girlfriend in 1997. Het had bought it brand new. Since he was an absolute guitar lover, the guitar is in ab-so-lute mint condition. I hardly play on this guitar, only when I feel like it. For example in studio recordings or high profile gigs. Every time I play it, it is a real thrill.

I will not go into detail about the price I paid for this baby, but a really good one would do app 3500,- euro. I have seen some reliced versions of this guitar (1 to be exact). This was in such a bad condition, it is like wrecking a ferrari… it cannot ever be reversed, due to the print. If you ever see one, do not pay more that 1000 euro if it is in this terrible condition:

It has the following set up:

The guitar’s pick guard is in the same pattern as the one on the body:

This print is also on the back of the guitar

The detail is very beautiful. Also, the neck of the guitar is made to the size of Richie’s hands, whose are the same size an mind (I have once had the opportunity to compare!). 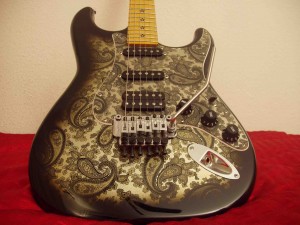 The fact that the guitar has an original Floyd Rose tremolo makes it very special. A lot of the strats have the standard Fender tremolo and do not have the humbucker on the back. This one does.

It plays really well and has the exact sound I like. It is one of my many Fender Stratocasters. The only thing it lacks is the mid boost botton, which my other Richie Sambora Signature Strat has. That is the only downside.

If you are able to buy one under 2500,- euro, I would say, do not hesitate and just buy the sucker. Treat it well and NEVER EVER sell it again, or, maybe just to me. I am interested in a second one! 🙂

Anyway, I also know that there are a lot of discussions going on on the web about this guitar. I even spotted by own guitar on “What’s up with Richie” forum. I can tell you, my guitar is really as beautiful as it is on the picture. The sound is even better. Anyway, I found another picture of Richie with the black Paisley, so I decided to post it. Richie also starred in the Fender Brochure for the 50th anniversary. In the gallery below you can see one of the rare pictures that were taken from him. 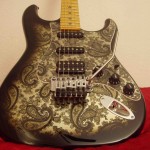 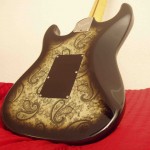 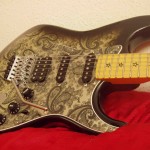 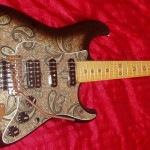 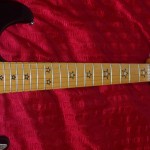 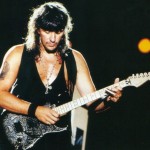 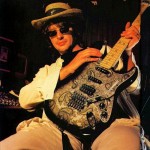 Richie in studio with Black Paisley 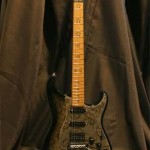 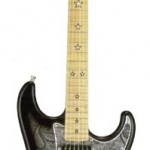 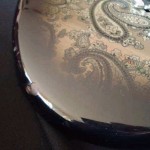 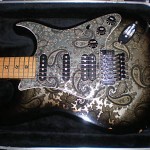 Here is one of the rare occasions where Richie played a paisley. It is a movie on YouTube.  The only downside is that the movie has been translated to French…. Sorry :-S