Which guitarist doesn’t know that feeling? The quest for the ultimate guitar tone. Pedals, guitars, pickups, cables, amps and cabinets. They are all revisited and re-evaluated in order to get the best possible tone. And once your budget grows, the great grows with it. In 2015 I wrote a post on my go-to preamp, the Marshall JMP-1. It was my trustworthy amp for many years. I think around 18 or 19 years. I used this amp in combination with the Marshall 9200 power amp and the Marshall JFX-1 effects processor.

Now, don’t get me wrong: this was and still is an amazing setup. But after all these years I wanted something different. Something lighter and more portable. Keep in mind that the combination of these components, and with the tuner, had a weight of approximately 40 KG. And I tell you: that’s a back breaker. 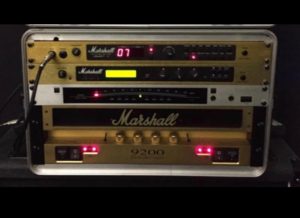 So, I wanted something different. But what? Less 80’s sounding, less Iron Maiden sounding. I looked at many types of Marshall amps, and Hughes & Kettner amps, but again wanted something more personalised – something more “me”, like the Marshall stack was/is me. For around 2 years now I have been following Rob Chapman on YouTube and his video’s for Anderton’s music co. Rob struck me as a driven and friendly person. He had been working together with Martin Kidd from Victory Amplification on a signature amp head called the Silverback. Robert Chapman is an English musician, video demonstrator, and founder and owner of Chapman Guitars. Chapman is known for his popular YouTube channel, on which he demonstrates guitar techniques and equipment at Anderton’s Music Store. He is the lead singer and rhythm guitarist of Dorje. Chapman was born in 1975 and lives in Brighton, England.

Victory Amplifiers are designed and (mostly hand) built in England. Victory Amplification aim is simple: to create amplifiers that inspire you ever onwards in your playing and never let you down. Martin Kidd is the head designer of Victory Amplification, and he is well known in British amplification circles, having designed & built some of the best amps in the world over the past 20 years  He heads up a modern-boutique approach to design and specification. Only meticulously hand-wired tag boards are used where Victory Amplification feel that method offers the biggest tonal benefits, alongside printed circuit boards where they make most sense. Victory Amplification never compromise on components, from caps and resistors, pots and switches, right through to our custom designed transformers.

The Silverback has been a project for Rob Chapman. He designed the amp along with Martin Kidd  and by design I mean that Rob voiced his wishes and preferences and Martin built the amp and gave it its exterior look. Here’s a cool video on the start of the project  Rob obviously didn’t want to disclose the Amp builders name yet. His thoughts on the design were quite different too back then. (“Give it a wooden look”).

The Silverback became the amp as it is now. It became a two channels amp which has clean, crunch and crushing overdrive tones. The amp delivers “the ultimate blend of sounds and features from Rob’s favourite amplifiers to date“, according to the website.  The amp has two special features: “Rob has also come up with an ingenious removable magnetic ‘Knobguard’ that keeps your settings safe when the amp is on stage, and also offers extra protection during transportation. There’s also a flip-up top grille to enable quick access for valve changes. The Silverback delivers all the power, reliability and tonal flexibility for heavy rock and metal players, not least Chappers himself! ”

You can see the amp develop over time.

This video gives more info on prototype 2, the smaller form factor of the amp. It resembles the amp I actually purchased at Anderton’s in october 2016. See this picture below. 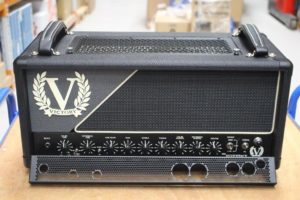 The Silverback is based on the Victory V50 (The Earl) amp but with a number of tweaks and enhancements. The Silverback is all valve, handwired point to point. This is not a cheap amp. It is hand-made by Victory, though. But it’s not cheap. At Thomann it lists for € 2.700,-  and gives you the following features: 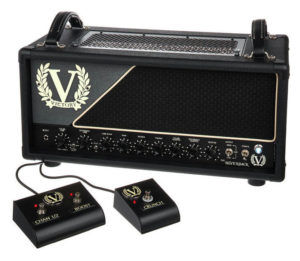 How is the Silverback different from the Earl? (According to Anderton’s website)

I stumbled onto a bargain at Andertons in October 2016: a B-stock Silverback, which had some minor scratches. Not really a concern. Anderton’s informed me that the crunch-pedal was wired incorrectly (on was off and vice-versa). Also not an issue. So, I bought the amp. It shipped perfectly and the crew at Anderton’s did a great job.

The amp is not a high gain amp like one is used to from, for example, Marshall. It has it’s own signature sound, and is very much Victory. The clean is very clean but can be controlled with the gain knob to make it break up. Not a feature I use a lot, just like the crunch feature. If you are into more classic rock (even the Rolling Stones) it can absolutely do the job. You can use the crunch “channel” (its not really a channel) for all kinds of light rock music.

The gain channel is more up my alley. The gain boost is great for solo’s and the gain itself is slightly darker, very distictive. I was used to play very high gain and the normal gain settings (without the boost) taught me that there was more in life than full power gain. The normal gain setting can be more open and can sound more like a guitar in stead of “gain”. With the boost, that level can still be reached. Yes, you can play Metallica with this amp (See YouTube movie here) and I play Iron Maiden with this amp. It does the high gain stuff without any issues.

I also purchased the matching cabinet from Victory, the V412S, to make it look and sound great. The cabinet does have more low end than my Marshall JCM 800 1960 A, so I do have to turn down the bass QC pot and I have, to control the low end, connected an EQ pedal from Mooer to the FX-loop. It works like a charm. I think I have found my new and better signature tone. This amp fits me and my music. I play all kinds of stuff, such as Foo Fighters, Iron Maiden, Bon Jovi, Paramore, Pearl Jam, Audio Slave, 80’s, 90’s and ’00 covers, blues. It does the trick. And I agree with the so called multi-style demo from Anderton’s as shown below. It can produce many different kinds of tone.

The EQ on the amp is a shared EQ, but my experience is that the EQ for the clean channel works perfectly for the gain channel and for the gain boost, which by itself has some more mid and high end. The amp is provided with the following controls:

I have set the EQ pretty much as Rob has demo’d it in his video’s, where indeed he also removes some of the low end. The reverb is okay, and could have been of a better quality since this is a short spring reverb. I like it, but as a mild reverb, not dialed above 08 o’clock. Here is the official video:

The gain and volume combination was slightly new for me but took me about 10 minutes to master. I felt in control of my amp within half an hour. And thrust me, the JMP-1 and JFX-1 took me many years.  The 50 watts are loud… very loud. You can even run the amp in combination with the Victory 4×12 cab on 15 watts mode, even in a band situation. You do have to drive it, but it sounds well saturated and driven. The sound is very natural even when using higher gain stages. Here’s a review by Rabea Massaad.

So, the complete setup costed me around 3.000,- with the B-stock and the special sale. It you would tae the normal list prices, it would come down to around 3.700 euro. That’s a lot of money. Is it worth it? My opinion is that it is. I have found great tone. Drop me a note if you have any questions. This is my setup below: 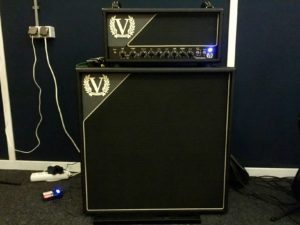 For you as a potential Silverback owner, its good to know that customer service at Victory is the best I have ever seen. They are extremely personal and are very responsive to your questions, remarks or enquiries. I have asked Victory a question on the background of the gain boost feature of the Silverback and was replied by Martin Kidd himself. I wanted to know if the gain boost feature would ba able to be set up to achieve a volume boost level. I was also wondering if there might be an internal pot-meter which might be adjusted. Martin was more than happy to take be through the technical aspects of the amp.

“The gain boost isn’t designed to produce a volume boost, as such, though Rob possibly achieves one by setting the overdrive gain much lower than 1:30 and the gain boost a little higher than 11:00, perhaps. The gain boost only allows more signal from the input stage to the second gain stage so really, as the second stage is already being overdriven, it isn’t able to amplify a signal any further. As we know, things aren’t quite so simple; so setting the overdrive gain a bit lower and the boost level a bit higher than you have them may produce the extra level you’re after but otherwise there isn’t anything in the amp that can be adjusted to give a solo level increase.”

The Victory amps community is also nicely united in the “Victory Amp Owners Club” on Facebook. People there are very positive and are more than happy to share their experiences. Here are some more backgrounds on the Silverback amp, told by Rob Chapman:

And if you want to know more about the background of this amp and would like to know more about the thoughts from its designed and builder, Martin Kidd, do take a look at this video. In This video Chappers & the Captain ask Martin Kidd to take you through the final stage of the long awaited Silverback amp from Victory. “You can see that Martin clearly a master at what he does, without letting his genius run off with his ego!“. This video shows the great (high gain) capacities of the Silverback.

Here’s an early episode of the way towards building and completing the Silverback. Quite obvious Martin Kidd is still working on the amp. The amp is in the back and lies on its back. Quite obviously still undergoing tweaks.

Here are some interesting links to Silverback related pages: