After using the Fender Mustang III V1 for a period of about one year as  my main practise amplifier, I decided to go for a full valve amplifier. I wanted something more simple, in stead of a modelling amp made by Fender. Not that the Mustang was a bad amp, because it has may advantages. No, I was also looking for a simple amplifier, with just some overdrive/distortion and a reverb and a clear channel. And next to this, I am a big fan of Marshall Amplifiers. So deep in my heart using a Fender felt a bit strange: The Fender was nice, but my gut feeling told me that Marshall would be more my cup of tea. I have been playing Marshall for many years, using a 1962a cab with Celestion Vintage 30 speakers. This is the feeling I have been playing with for many years.

Do keep in mind that I also considered to look at “The Valve” boutique amps. The 2/50-2 is awesome, but can you really use it at home? Sure, when driving the tubes, the sound is great. But I wanted something that can be used at home as well as in a small venue. My heart told me… Marshall…But something with real tubes.. 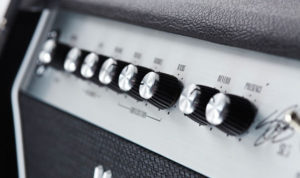 So, after searching for some days, I stumbled on to the Marshall SL-5, the Slash Signature amp. The amp has been designed with and approved by Slash himself,. The 5 Watt SL5 combo is a more accessible way to Slash’s tone, and has been devised primarily for studio or home use. It has two channels, switchable between clean and overdrive. The clean channel takes you from Slash clean to raunchy crunch, and the overdrive channel nails that Slash-style dirty tone.

So… How could I convince myself this amp is worth the money? First of all, I am a great fan of “Chappers & The Captain”….Here’s a great review by Rob Chapman and Lee Anderton, from Anderton’s Music Store:

Basically, the SL-5 is the 5 watt version of the historic AFD-100 from Marshall, introduced by Marshall in 2010.

Now, switching the SL-5 down to 1 Watt means that you can have all that great Slash tone at a volume that won’t wake the neighbours. At the heart of the SL5 are three ECC83 preamp valves and a single EL34 in the power stage, with custom digital reverb. The speaker is one of Slash’s favourites, a 12” Celestion Vintage 30. When playing this amp it is amazing how much of the Slash sound you can actually recognize. The SL5 is like a bonsai Marshall – small but perfectly formed. Indeed the two switchable channels are rather different. The clean channel has sufficient headroom and gives a very warm tone.

According to Guitar & Bass “The overdrive channel is voiced with definitive Marshall bite, and even with the gain down low the sound is never entirely clean. Turn the gain up a couple of notches and the SL5 bursts into life. From here things move progressively from heavy rock to blistering gain, and the middle control exerts a strong influence on the character of the tone.”

Well, and as always, It’s good to hear the demo from Marshall itself. Here’s the demo by Chris George.

For your convenience, I have added the Marshall SL-5 handbook (user manual) here.